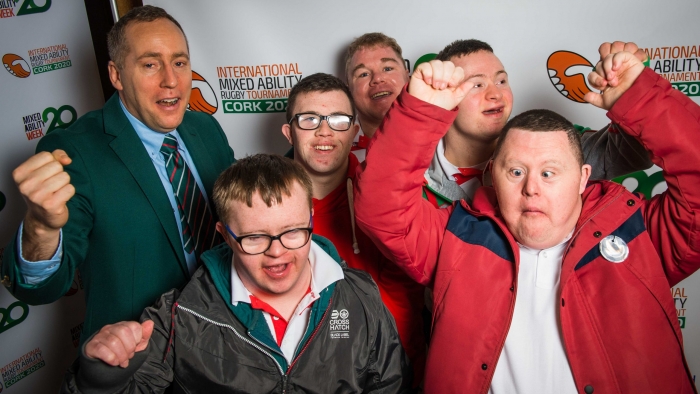 With just 3 weeks to go, the organisers of the IMART Mixed Ability Rugby World Cup are looking for 200 volunteers in the Cork area to be a part of the event. The tournament which will host an estimated 25,000 players & spectators across the week, will be a 6-day long affair, and organisers say they need approximately 200 people on the ground to ensure the event is the absolute best it can be – and to showcase all that Cork has to offer as a sporting host.

This will be the 3rd edition of the worldwide Mixed Ability rugby showcase promoted by International Mixed Ability Sports (IMAS), and supported by the IRFU.

In the region of 1100 players both with and without disabilities, from 14 countries such as England, Ireland, Scotland, Wales, Italy, Spain, Belgium, Canada, Argentina and Poland will come together to play rugby under same World Rugby laws as the XV a side game with only minor adaptations such as uncontested scrums.

This year’s event is made extra special by the fact that it will host the first ever KPMG sponsored Women’s Mixed Ability Rugby tournament.

IMART have also announced that Smurfit Kappa, world leader in innovative, sustainable packaging, has come on board as headline sponsors of the event.

Speaking of what lies ahead in preparation for IMART, Liam Maher, co-founder, IMART 2022 said:

“We are only 4 weeks out and the event is really beginning to take shape. There’s huge excitement within the IMART camp here in Cork, but also amongst the teams from around the world who are travelling here to take part in a tournament that celebrates diversity and inclusion in sport.

“What we need now is a strong team of people who would like to be part of, what promises to be, one of the most inspirational sports events ever to come to this country. We have already received huge support from people throughout the country, and this is the final push for volunteers. Responsibilities will range from general volunteers to translators, who will support the 14 teams competing across the week.”

Irene Page, Group Financial Controller at Smurfit Kappa, who is leading the company’s involvement with IMART 2022, had this to say:

“Our ‘EveryOne’ Inclusion, Diversity and Equality programme aims to create an even more inclusive workplace for our 48,000 employees so we’re delighted  to be supporting the International Mixed Ability Rugby Tournament coming to Ireland for the first time. What’s more, Smurfit Kappa has a presence in 12 of the 14 countries participating so it’s going to be very exciting for our colleagues to cheer on their local teams.

“Mixed Ability gives everybody the opportunity to be a rugby player regardless of size, shape or ability. Disability is one of the five focus areas of our EveryOne activity and we strive to value and support everyone who has a disability whether visible or invisible; physical or intellectual. Supporting IMART is providing an incredible opportunity to welcome teams from around the world, celebrate the achievements of the players and create memories that will last a lifetime.”

The Mixed Ability Model – championed by IMAS – encourages social inclusion by removing barriers to participation for people who feel unable to join mainstream grassroots clubs or groups due to physical or learning disabilities, mental health issues, size, shape, age, prolonged inactivity, or a perception of ‘not being good enough’. It is hoped that the IMART Tournament in Cork next year will enhance interest, participation and interaction of people of all abilities in the sport across Ireland and beyond, and help to build new connections between grassroots clubs, educational institutions, communities and local authorities.

Volunteers for the event are invited to register their interest at https://www.imartworldcup.org/ 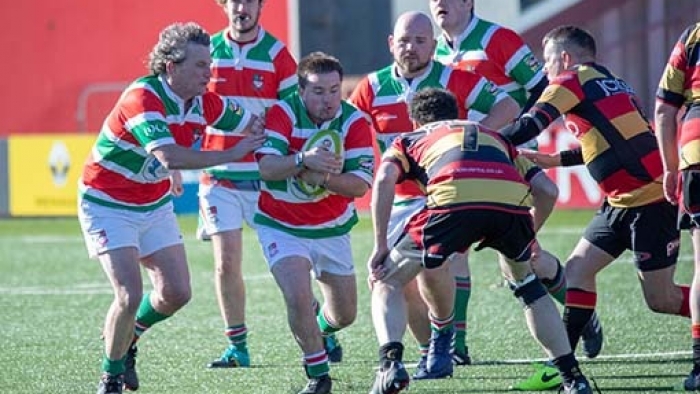 This summer’s IMART 2020 World Cup and Mixed Ability Week 20 has been postponed until Summer 2021 to allow time for the world to grapple with the Covid-19 outbreak.

With over 1000 players from 14 countries due to compete in Cork this June for the International Mixed Ability Rugby World Tournament, the organisers felt this was the most appropriate course of action to protect the health and safety of our players and supporters.

IMART is intended to be a joyful event, celebrating diversity and the welcoming nature of rugby. Under the current circumstances and uncertainty this would be impossible to guarantee within the next three months.

“The postponement of IMART and MAW to proposed time of Summer 2021 comes as a big disappointment to us, the community working to make IMART a reality, but we are delighted with the continued support of our sponsors and players, and know that we will rise again,” said IMART chair, Liam Maher. Mr Maher described the coronavirus pandemic as “the biggest crisis that the world has faced in living memory” but reiterated that “Cork looks forward to giving the international rugby community a warm welcome in the Summer of 2021.” 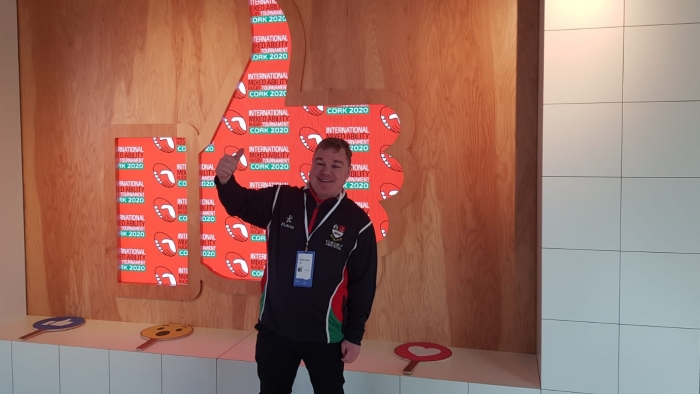 Journalist and broadcaster Matt Cooper, who has been championing IMART 2020 since Sunday’s Well Rugby Club saw out tough competition to win their bid to host the tournament in Cork, was in attendance at Facebook EU HQ in Dublin’s Grand Canal Dock on the day, to draw the groups for the 3rd edition of the International Mixed Ability Rugby World Tournament.

This year’s tournament will see 28 teams from 14 countries, 1,000 players and, for the first time, four women’s teams compete for the Women’s Winners Cup and Women’s Spirit of Mixed Ability Rugby Cup from the 7th-12th of June in Cork. 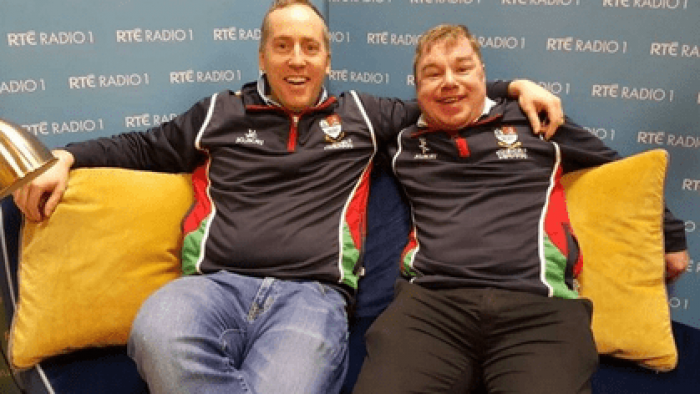 “If you have a disability, and don’t have someone backing you, you will end up as a spreadsheet,” says co-founder of IMART Alan Craughwell.

Watch Alan and James in action at our launch in Cork City Hall early in February:

If you would like to donate, please here: https://imartworldcup.org/donate/ 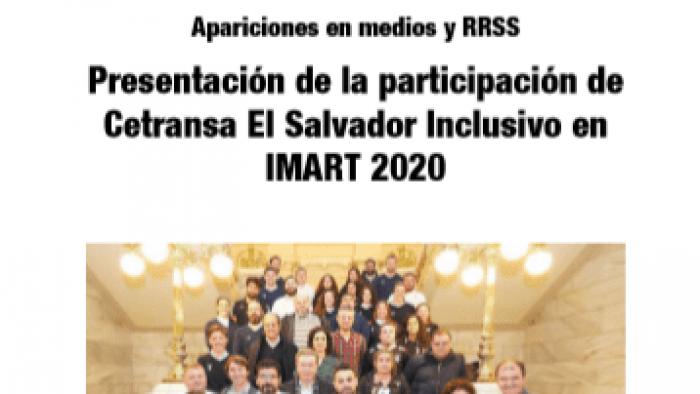 With over 14 countries being represented by 1,000 players, IMART 2020 promises to be a remarkable international rugby tournament.

To showcase the real international event that is IMART, below see various regional and national media coverage secured by one of the participating teams in their home country of Spain.

Well done El Salvador and we are really looking forward to welcoming you to Cork in June! 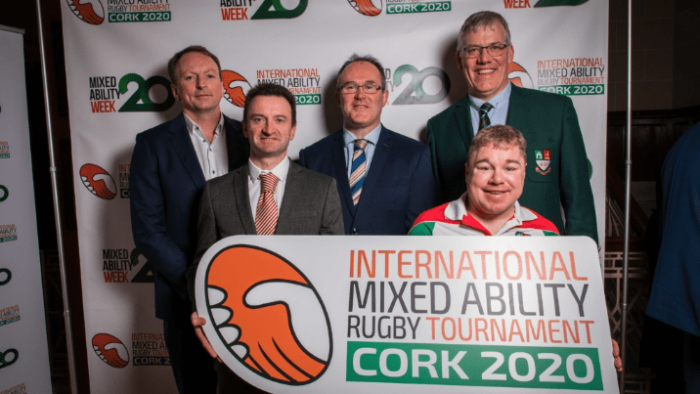 This June Cork City will play host to 28 teams from 14 countries including Argentina, Italy, New Zealand, Ecuador, Spain and the UK for the International Mixed Ability Rugby World Tournament 2020.

The bid to host the tournament was secured by the Sundays Well Rebels in Cork – the first ever mixed ability rugby team.

Read more on this article via O’Flynn Exhams Solicitors: https://bit.ly/2ugw4ZB

Speaking at the launch of the partnership, Permanent TSB’s Retail Banking Director, Patrick Farrell, said: “A fundamental element of the Bank’s Responsible Business agenda is building strong community partnerships that enable us to have a positive and meaningful impact on the communities where we live and work. Permanent TSB is delighted to be able to support IMART 2020 as Headline Sponsor and look forward to championing resilience, determination and world class competition this summer at the games in Cork.”

He continued, “We are proud to play a part in this world tournament, celebrating diversity and inclusion in a meaningful way”. 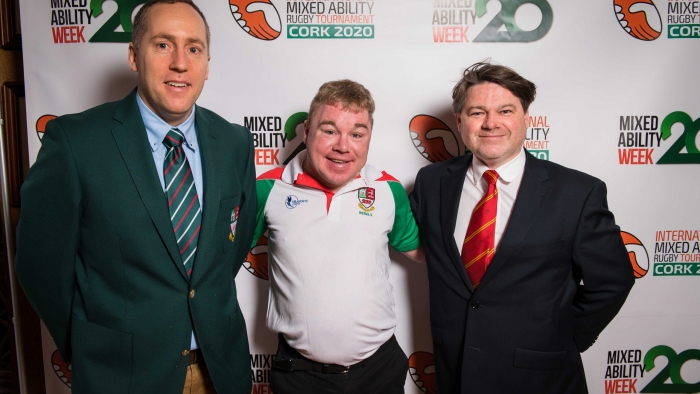 “We wanted to demonstrate that someone with a disability could play sport, but not only that, they could also play with someone who does not have a disability”, Alan Craughwell, co-founder of Ireland’s first mixed ability rugby team.

To read more about James’ story and how playing rugby has had a significant impact on his life, check out this article via the Irish Independent https://bit.ly/2V0VFki 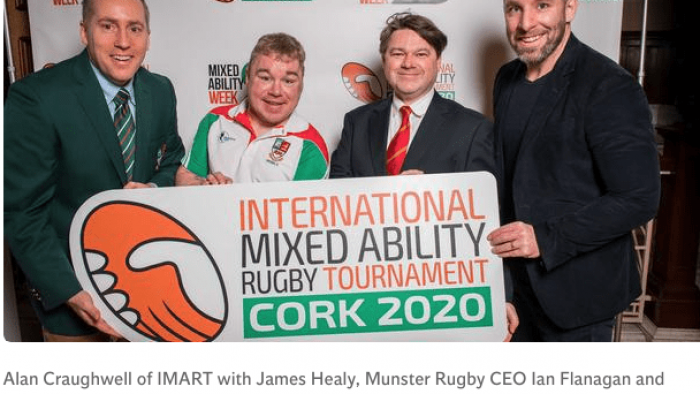 Aside from holding down two jobs, James will this year form an integral part of the only Irish rugby side to ever win a World Cup (Sunday’s Well, in 2015) as Ireland prepares to host its first World Cup (the third staging, in Cork, will be in June).

For more on this inspirational story, click this link to Independent.ie: https://bit.ly/37OURlu 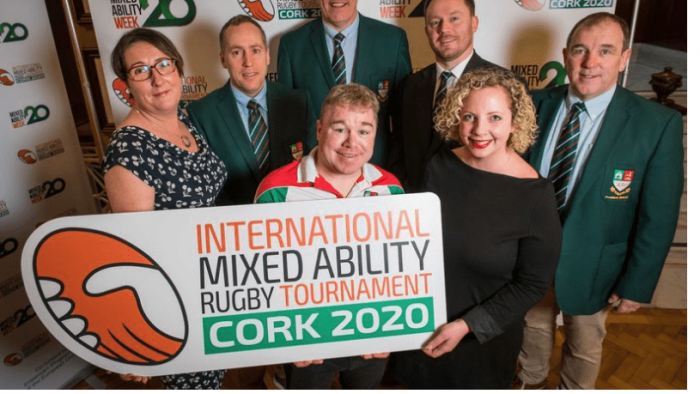 The competition selection for the IMART 2020 Mixed Ability Rugby World Cup Tournament, which will be on in Cork in June, took place this week in Dubin.

Journalist and broadcaster Matt Cooper, who has been championing IMART 2020 since Sunday’s Well Rugby Club won the bid to host the tournament, was in attendance at Facebook EU HQ in Dublin’s Grand Canal Dock, to draw the groups for the third edition of the International Mixed Ability Rugby World Tournament.